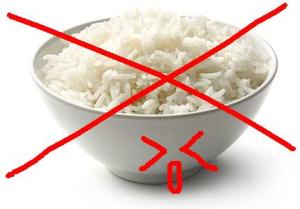 -So Italia we have a question for you, as a chef is there something you don’t like cooking? – The interviewer asked and after a long uncomfortable pause in which I thought “well whatever my answer I will be accepting a weakness.. oh what the heck”

-Rice, I hate cooking rice! Rice is my nemesis, we don’t like each other unless it is in sushi or it is served to me in a restaurant.

I think it is maybe because I get so scared that it will get stuck to the pan or pot that I stir and stir until I have an oatmeal consistency.. I have tried not stirring so that it doesn’t break apart but then I get scared it will burn so I keep adding water…

Making rice for sushi is fine since it can break a little and it will still stick just fine.. also cooking risotto is fine since adding the cream and the fact that you can leave it slightly “al dente” makes the trick.

I started a journey on finding techniques for the perfect rice and here’s what I found.

Gordon Ramsay’s basmati rice is cooked by rinsing the starch off in running water then putting it in a pan with .5 part rice to 1.5 part water, some cardamom and star anise to spice it out. Afterwards a quick boil then simmer to steam out.

Now Thomas Joseph has a different side of his story in which he boils the salted water first then drops the rice as it is (no rinsing) then after 10 mins he drains out the water!

Mexican traditions however shows is that rice must be fried first!! Johnny Hernandez shows how (in a tex-mex way) you must fry the rice first then add stock. He mentions you can finish it in the oven too as al alternative.

Going to a bit asian we have chef Ming Tsai rinsing the rice in a bowl a few times then measures water by placing his open palm into the bowl and filling until it touches his middle knuckle. Afterwards he goes to a similar technique to Ramsay’s bu bringing it to a boil, then letting it steam but he rather let it sit fir some minutes. He also shows the rice cooker where he measures water using the first knuckle of his index and lets it steam (no stirring!)

One of my favorite chefs, Jamie Oliver breaks all the rules (that’s why I like him) saying it doesn’t matter if water is hot or cold and also it wont make a difference if rice it’s not rinsed. In this 4min video he gives 4 amazing extremely easy to do recipes to play around with rice. Have fun!

My dear Sybarites let’s try this techniques and see which one is better shall we?