Have you ever listened to a song that makes you feel happier, sad, melancholic or transports you to faraway lands making you feel different? Has it ever occurred to you that music not only affects you but also what you eat? Yes I am talking about herbs, veggies, cows, even fish! Let’s take a look into some discoveries thought time…

One of the pioneers on plant perception was Jagadish Chandra Bose (1858-1937), who conducted a series of experiments to depict the theory that plants were susceptible to several stimuli apart from the physical ones like temperature and light including words, affection and of course music.

Years later in the 70’s Dorothy L. Retallack  conducted also several experiments on the impact of music in plants and what type of music they seemed to like. Her works were immortalized in her book “The sound of music and plants” where she mentioned that jazz and classical music seemed to be the most helpful for plants to grow faster and stronger, in general harmonic music.

After such discoveries were made, many musicians dedicated their time to made recordings for their greenhouses. 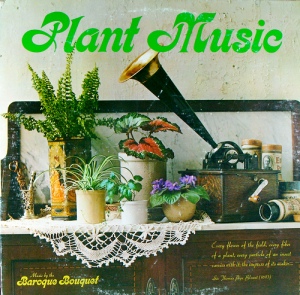 In later years such trend has developed into composing special music for plants and not only finding what they like of what exists already. Peter Coffin has gathered a series of artists to produce music for plants, listen to some here.

Now this gets more interesting, how about playing music to vines in order to gen amazing quality of wine? Well in Paradiso di Frassina, only 5km from the region of Montalcino in Tuscany (famous for their Brunello), decided to experiment and decided to choose Mozart. Since 2000, the team has played Mozart to the vines 24/7 and had incredible results.

This technique has also helped milk production, in 2012 the British Columbia Dairy Association launched the  “Music Makes More Milk” contest in which several people would write easy to listen and slow jams for cows to be relaxed and produce more milk. Here the winner:

In 2005 the International Repertory of Music Literature (RILM) published a delightful book called “Dinning with RILM” in which they make a detailed connection of food and music through the years. As astonishing as it is many of the grand musicians like Rossini, Schubert and Strauss loved to cook and also left a few recipes of their own! I would not be surprised if a study was done on how many chefs are also musicians or the other way around.

Happy relaxing music from growing your produce, to harvesting, to cooking and finally consuming it has been scientifically proven to be vital and yet not many have given it the importance needed. 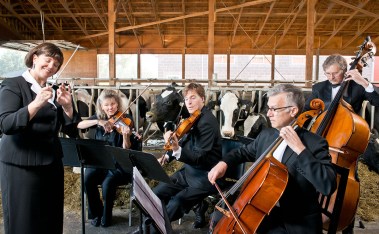 Sybarites, be smart and play some jazz next time you decide to grow herbs on your backyard and also while cooking!

More on music for cows here and here.

For more on Peter Coffin’s music for plants go here.

Read the preface of Dining with RILM here.